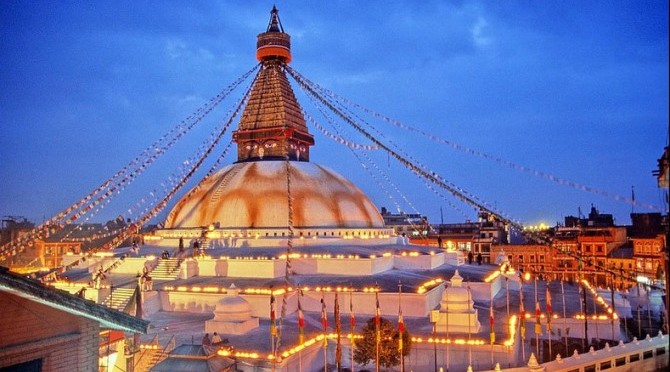 Nepal is a land of high Himalayas and deep valleys. It is one of the richest countries in the world in terms of natural beauty due to its unique geographical position and latitudinal variation. It is located between two big countries India in the South and China in the North with approximately 3 million peoples. So Nepal is also known as a Yam between two big stones. It is divided into three different parts i.e. Himalayan, Mid- hilly and Tarai. It has a diverse geography including fertile plains, subalpine forested hills and eight of the worlds.

Eight highest mountains, including Mt. Everest, the highest point on the earth. Kathmandu is the capital city. Nepal is a multi-ethnic country and Nepali is a official language.

Nepal is a landlocked country located in South Asia . It occupies 147,516 sq km. It falls in the temperature zone North of the Tropic Cancer. The entire distance from East to South to West is about 800km while from North to South is 150km to 250km. The elevation of Nepal ranges from 60 meters above sea level to the highest point on earth, Mt. Everest, 8,848 meters.

Nepal has been accepted as one of the most fascinating countries in the world. The people, rich festivals and cultural heritage, towering pagodas, spectacular Himalayan ranges of this country have played important role in recommending Nepal as an ultimate destination.  It is a country of ethnic and topographical diversities, rich in flora and fauna, adorned with exceptional architecture which is unmatched by any country of the world. Nepal is also known as the third pole of the world.

Historically Kathmandu valley is known as Nepal valley or Nepa valley. It has at least 130 important monuments including several pilgrimage sites for Hindus and Buddhists. There are seven world heritage sites within Kathmandu valley. They are Swyombhunath temple, Bouddhanath stupa, Pashupatinath temple, Kathmandu Durbar square,Patan Durbar square, Bnaktapur durbar square and Changunarayan temple. Until 15th century , Bhaktapur was the capital city of Nepal.The Kathmandu valley is the most developed and populated place in Nepal. The majority of offices are located in this valley. So it is the economic hub of Nepal and people from other parts of Nepal tend to migrate to the valley for a better life due to its high level of cultural and economic development. It is popular with its unique architecture and rich in culture.
The Newars are the indigenious inhabitants and creators of the historic civilization of the valley. Their language is today known as Nepal Bhasa. They are the ancestors of the various ethnic and racial groups that have inhabited and ruled the valley in the two-millenium history of the place. They are known for their contribution to art, sculpture, culture, literature, industry, trade, agriculture and left their mark on the art of central Asia. The Mallas ruled the Kathmandu valley and surrounding area from 12th and until 18th century when the Shah dynasty of Gorkha kingdom under Prithivi Narayan Shah conmquered the valley as he created present day Nepal.
The Kathmandu valley was once a lake considered by scientists as Kathmandu Lake . The hill where Swoyambhu stupa rests had Lotus plants with flowers in bloom. One story says that the God Manjusri cut a gorge at a valley called Kashapaal with a sword and drained away the water and later established habitable land. The valley is made up of Kathmandu district, Bhaktapur district and Lalitpur district. It covers an area of 220 sq miles. The valley consistys of the municipal areas of Kathmandu, Patan , Bhaktapur Kritipur and Madhyapur Thimi.

Historically Lalitpur is known as Lalita Patan, the beautiful Patan or Lalitpur. It is the oldest and the most vigorus city in the Kathmandu valley which is believed to be founded in the 3rd century B.C. by the Krant dynasty. Later on expanded by the Lichhavis period and further expanded by the Mallas during Medieval period. It is located about 5 killomiters away South – East of Kathmandu city.

Lalitpur is extremely rich in historic past, culture, its arts and especially wooden and metal workers. This city is the third oldest city in Nepal . It has been preserving its un unique places since ancient times. Before many centuries, Lalitpur was a sovereign state. But later on King Prithivi Narayan shah absorbed it intio the kingdom of Nepal. It is also rewoned all over the Nepal for its arts and craftsmanship and has produced a large number of artists. Araniko is one of the most famous art in Lalitpur. It has also large numbers of temples, old traditional buildings, pagodas, monasteries, and stupas.
There are many legends aftyer its name, Lalitpur. One of the name was called Lalit a farmer who carried God Rato Machindrtabnath to the valley all the way from Assam India.The purpose of bringing the God Rato Machindranath to the valley was to overcome the worst drought there. There was a strong belief that the God Rato Machindranath would bring the rain in the valley. It was due to the Lalit effort that the God Rato Machindranath was settled in the Lalitpur. Many believed that the name of the city was kept afterv his name Lalit and Pur means worship in Nepal.